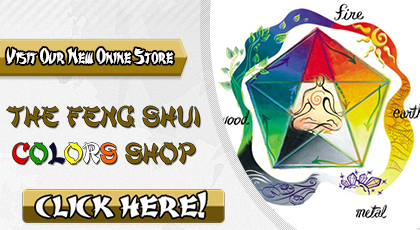 In the tenets of Feng Shui and in addition to the five basic colours, there are many other colours. These colours are referred to as the mixing colours and are the focal point of this article.

Orange is considered a lucky colour and a symbol of power due to orange’s proximity to red. Feng Shui teaches us that orange also strengthens social harmony and is beneficial in the context of social gatherings. Orange colours should be used in social areas and lounges, because it promotes a relaxing atmosphere and casual interactions with others. Element = Earth

Purple is a very positive colour and symbolizes the bringing of happiness (especially when it is combined with silver). In Feng Shui, purple is the symbol for truth, principles and ideals. Purple is also the colour of philosophers, thinkers and visionaries. Element = Fire

Light Blue contains a lot of energy, which excites and inspires people. In addition, it calms us in the same way as green. Light blue should be used in dark rooms with little sunlight, because it visually lightens up the space and creates a friendlier atmosphere. Element=Wood

Turquoise is produced by mixing blue and green. Turquoise also mixes the properties of these colours in Feng Shui. Therefore, turquoise promotes a stimulating and inspiring environment. Element=Wood

Violet Due to violet’s proximity to red, it is assigned to the purple element fire. It symbolizes passion and promotes sociability. Element=Fire

Pink is the colour of romance, passion, infatuation and love. It also represents honest and sincere feelings. Since these properties are very stimulating and exciting, pink is often used by young people and people young at heart. Older people who do not wish to be stimulated in this way should use pink sparingly. Element=Fire

Dark Brown represents robustness and stability. It stands for elegance and severity. You would be right, if you had guessed that this colour is attributed to the element earth. Other positive features of dark brown include that it promotes seriousness and reliability, as well as practicality. However, be careful not to overdo it. Too much brown is more likely to result in a crippling and slowing effect, rather than having a positive impact. Element =Earth

Additionally, Light Brown belongs to the element earth and in Feng Shui, it represents a new beginning and overcoming old problems. Element =Earth

Silver is a clear color of the element metal. Silver is similar to gold in that it promotes wealth. Silver works best in combination with purple,because this is very positive and enhance happiness and success. Element=Metal

Gold is very similar to silver. However, in general, yellow is used more often in Feng Shui. The properties of these colours are close to identical. Element=Metal

Grey in Feng Shui is the absolute “no go”.  One can almost say that grey is an ale for negative influences. In particular, grey promotes hopelessness, fear, sadness, disappointment and failure. If white(metal) meets black(water), the result is that rust is formed. For this reason, the colour grey in Feng Shui is also associated with mortality. Due to this negativity, you should use grey as little as possible. Element=Metal

.
As with the cycles, there are harmonic and non-harmonic colour combinations. Indeed many of the non-harmonious combinations are not visually pleasing and you will feel somehow uncomfortable when viewing these combinations.